These are not actually my property.  These were lent to me by a friend and I thank him greatly.  He's not mentioned here because I don't want everyone calling him for copies! 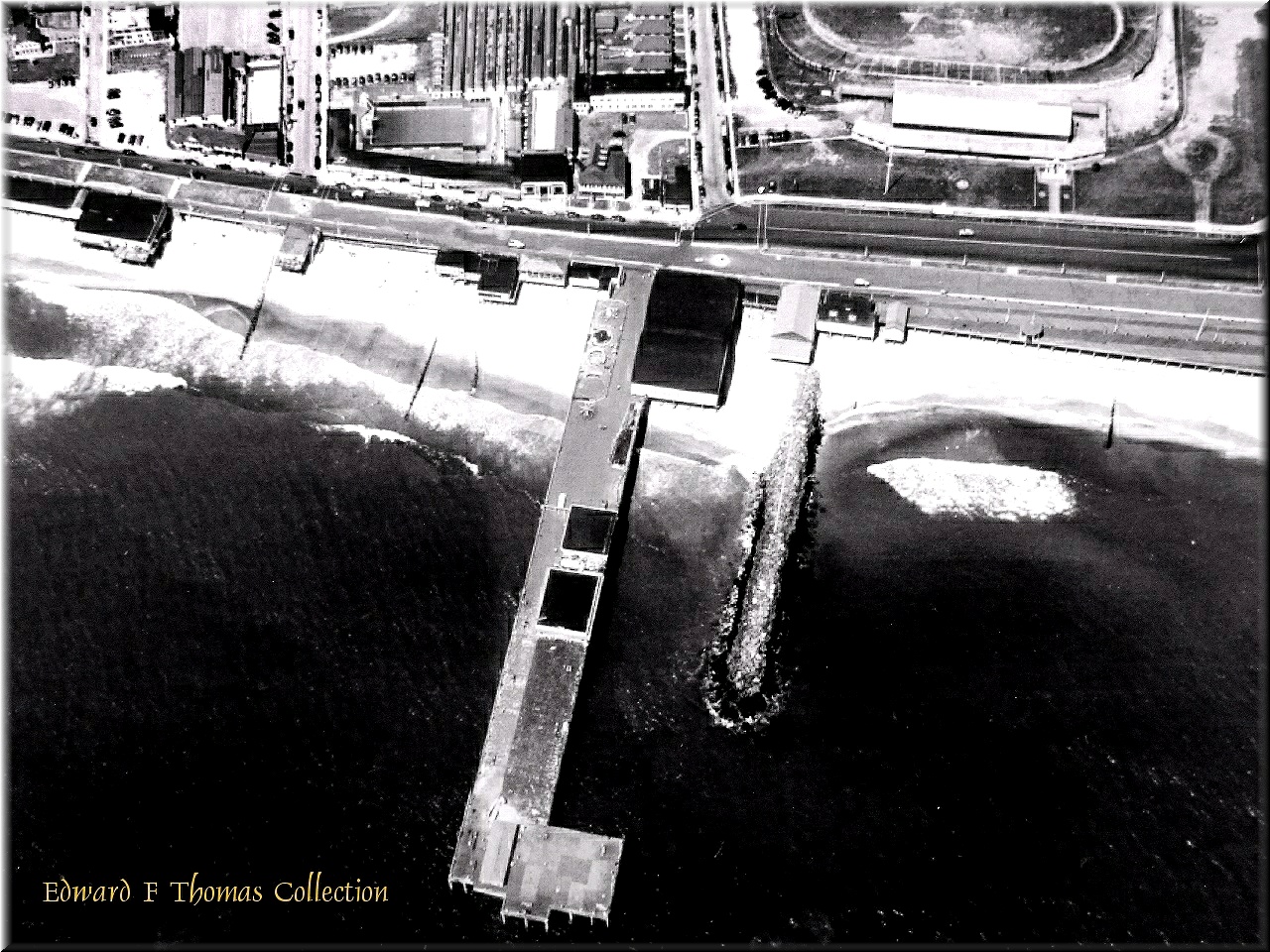 This is how most people remember the old "fishing pier" before it was home to Pat C's Haunted Mansion and Amusement Park.  Actually, this is only about � of the original length of the pier from when it was built.    You can see the racetrack and stadium in the footprint where the "new" casino stood.  Look to the right and you can see the faint remains of the original approach to the old casino and garden. 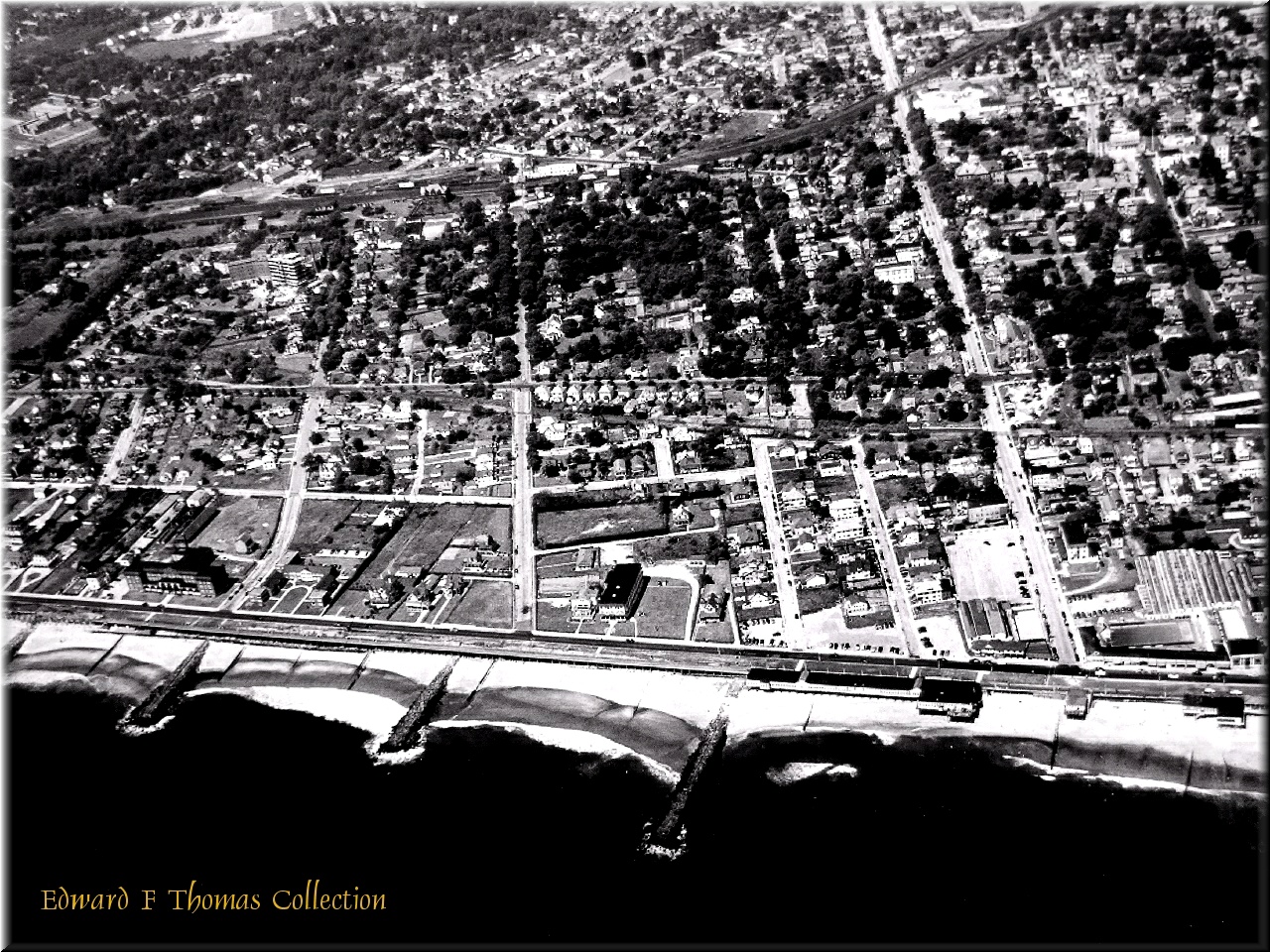 On Ocean Avenue to the south (that's left), we see the "New Atlantic Hotel" on the corner of Pavillion Avenue.  In the center is the "Riviera a/k/a Ocean Plaza Hotel" between Morris Avenue and Melrose Terrace.  In the upper left we see the original "Monmouth Medical Center"  with the north wing still under construction. 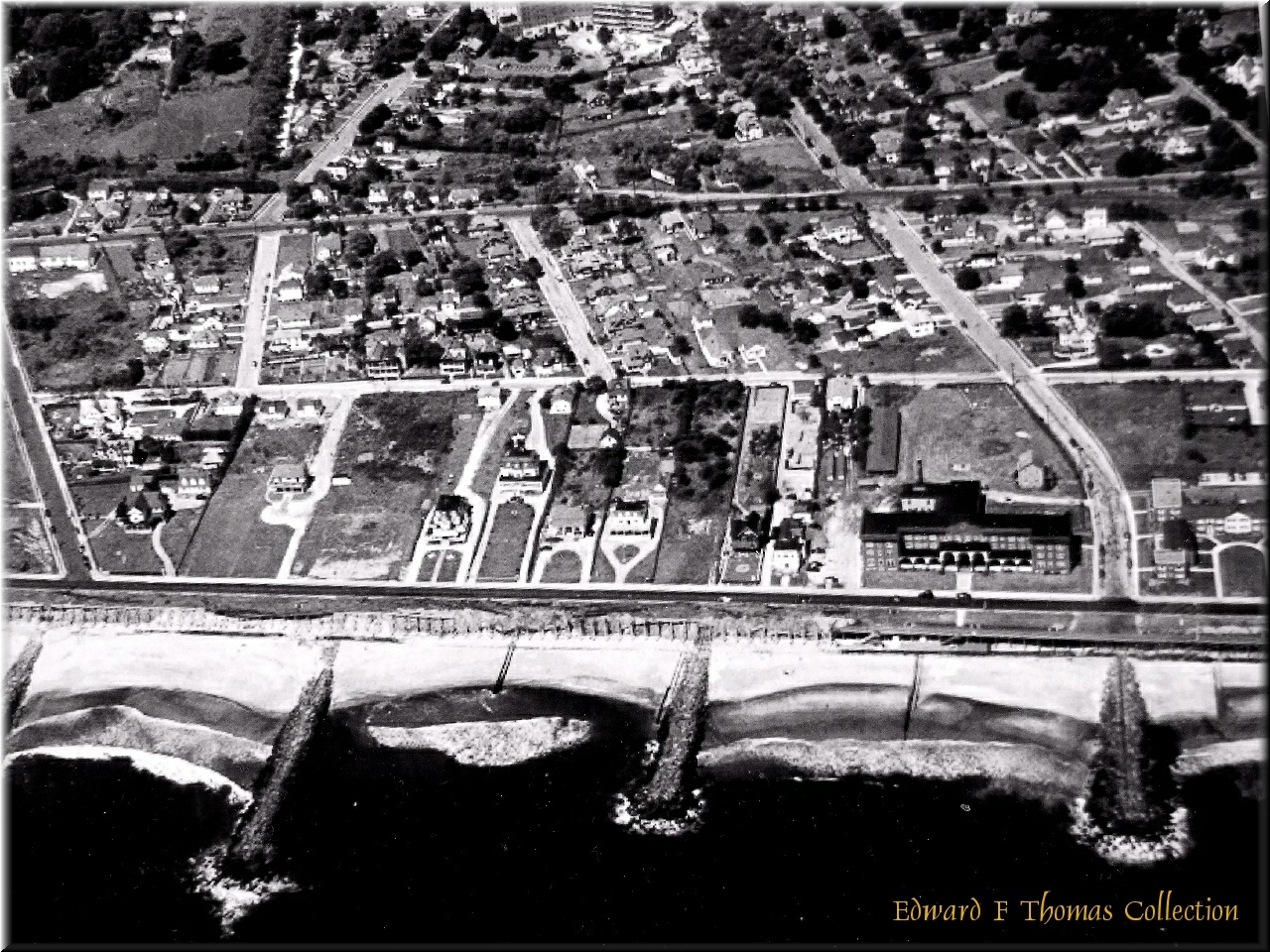 This view Ocean Avenue from North Bath Avenue to Pavillion Avenue shows the detail of recent storm damage to the boardwalk.  Aside from the absence of the "New Atlantic Hotel", many of the oceanfront properties pictured here remain unchanged today from Bath Avenue to the Marine Gardens Apartments.  This is the area designated by redevelopment as "Beachfront South".  All of these homes will soon be taken for new construction. 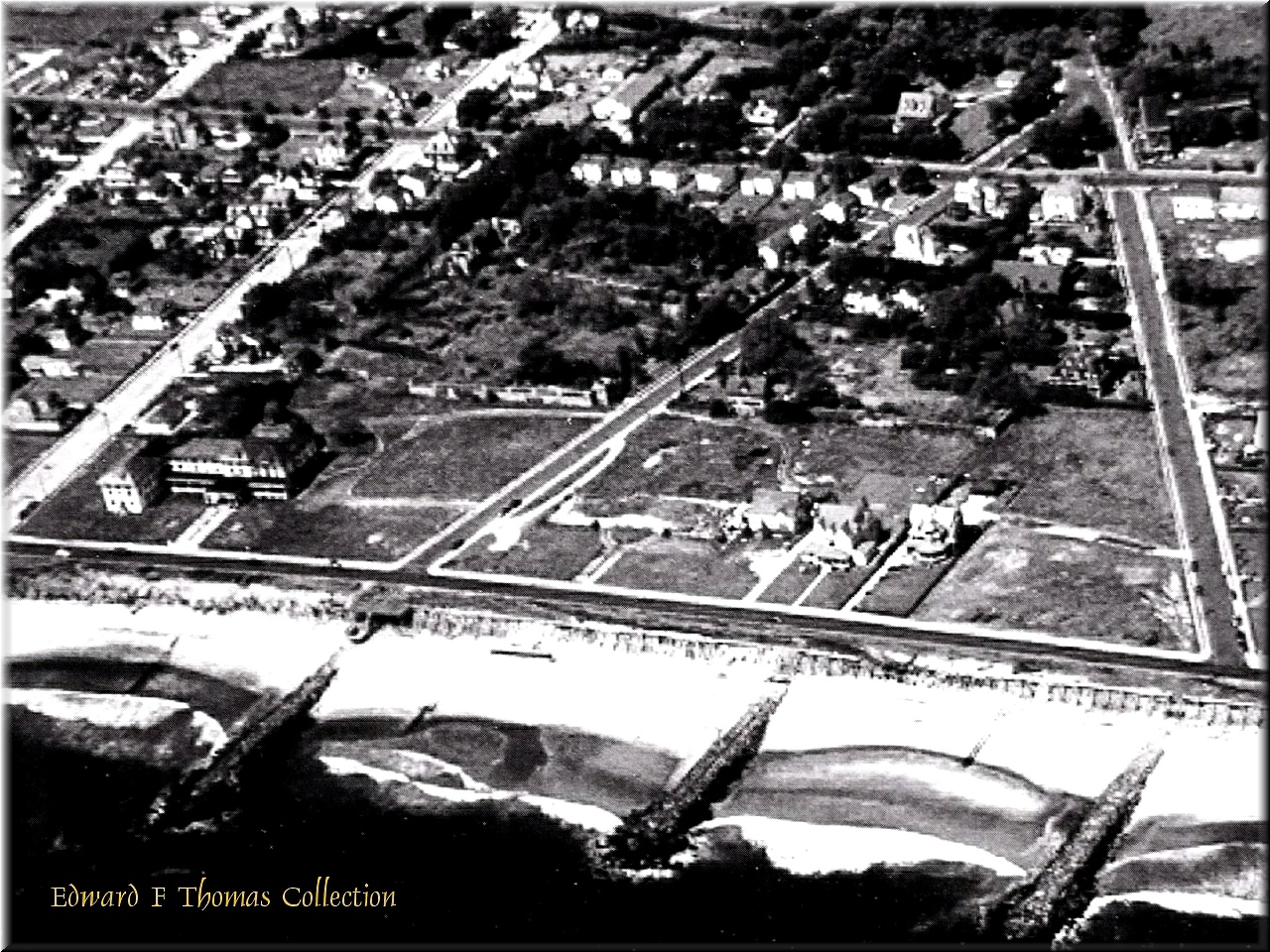 This view is Ocean Avenue from Cottage Place to North Bath Avenue.  On the left is the "Hotel Vendome."   On the northwest corner of Ocean Avenue and South Bath Avenue is the footprint and old walkways to the "Scarboro Hotel."  In the center is the much depicted "Hearn Estate."  The original gate house can clearly be seen on South Bath Avenue where Ocean Blvd. passes through today.  A long section of the estate wall remains preserved behind several homes on Second Avenue, south of Bath Avenue. 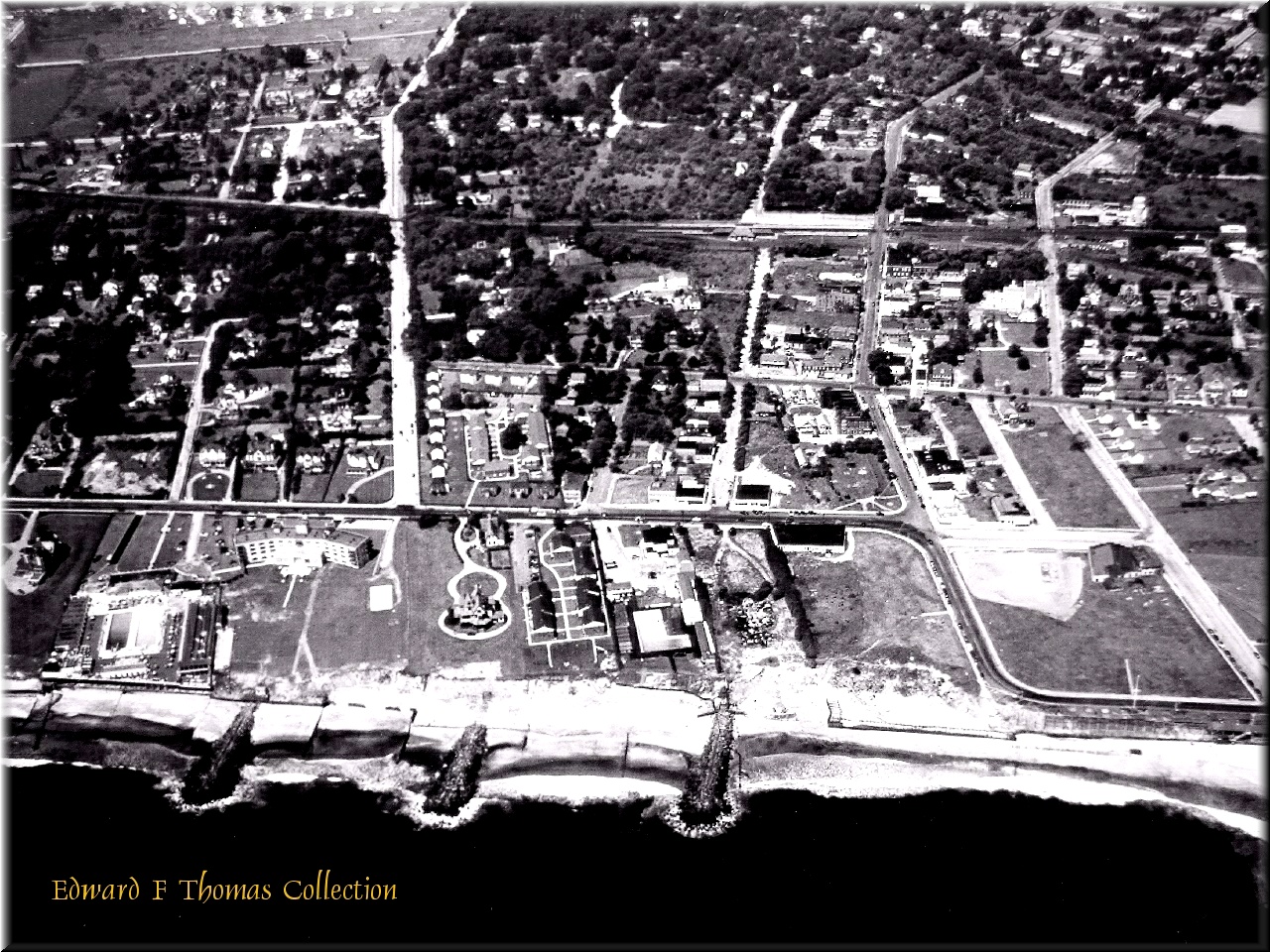 This view of Ocean Avenue is from just south of Sternberger Avenue to West End Avenue on the far left.  A lot of good friends are missing from this image.  On the far left is the "West End Casino" with its dual pools.  To the right of that is the "Harbor Island Spa."   Look at that beautiful Victorian home where the "Imperial House" condo highrise is today.  On the southwest corner of Brighton Avenue and Ocean Avenue is the old footprint and walkways to the site of the "Johnson Club" where the park is today (finally, a change that was actually an improvement!)  The "West End Cottages" and "Hotel Takanassee" are just faint ghosts in the dirt.  Farther west on Brighton Avenue the "Brighton Hotel" can be seen where the "Bank of New York" is today.  On the railroad tracks at the end of West End Court is the "Hollywood Train Station" located where the Foodtown parking lot is today.  Look up in the upper left corner and you can see the "Hollywood Hotel" on the southwest corner of Cedar Avenue and Hoey Avenue. 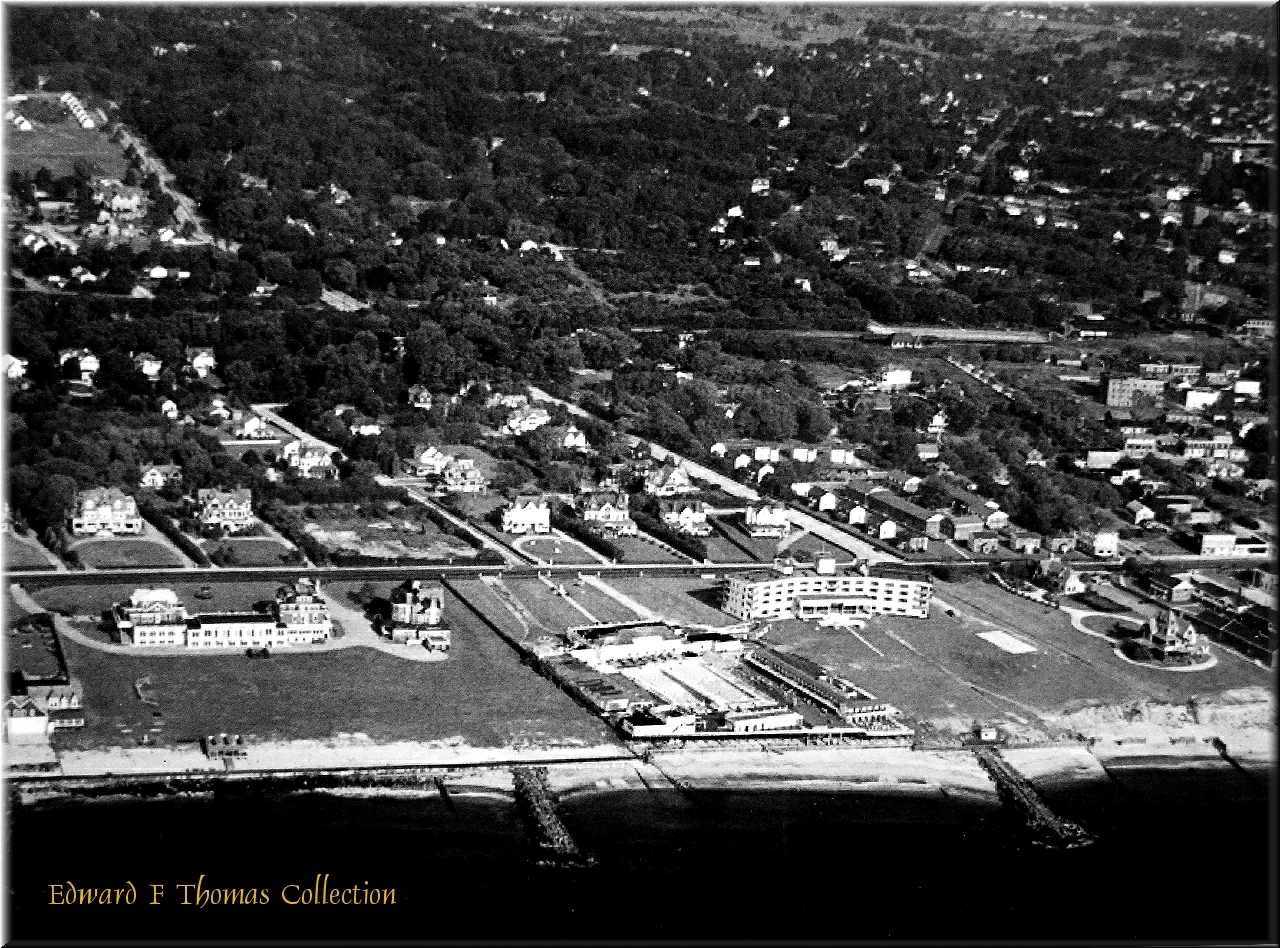 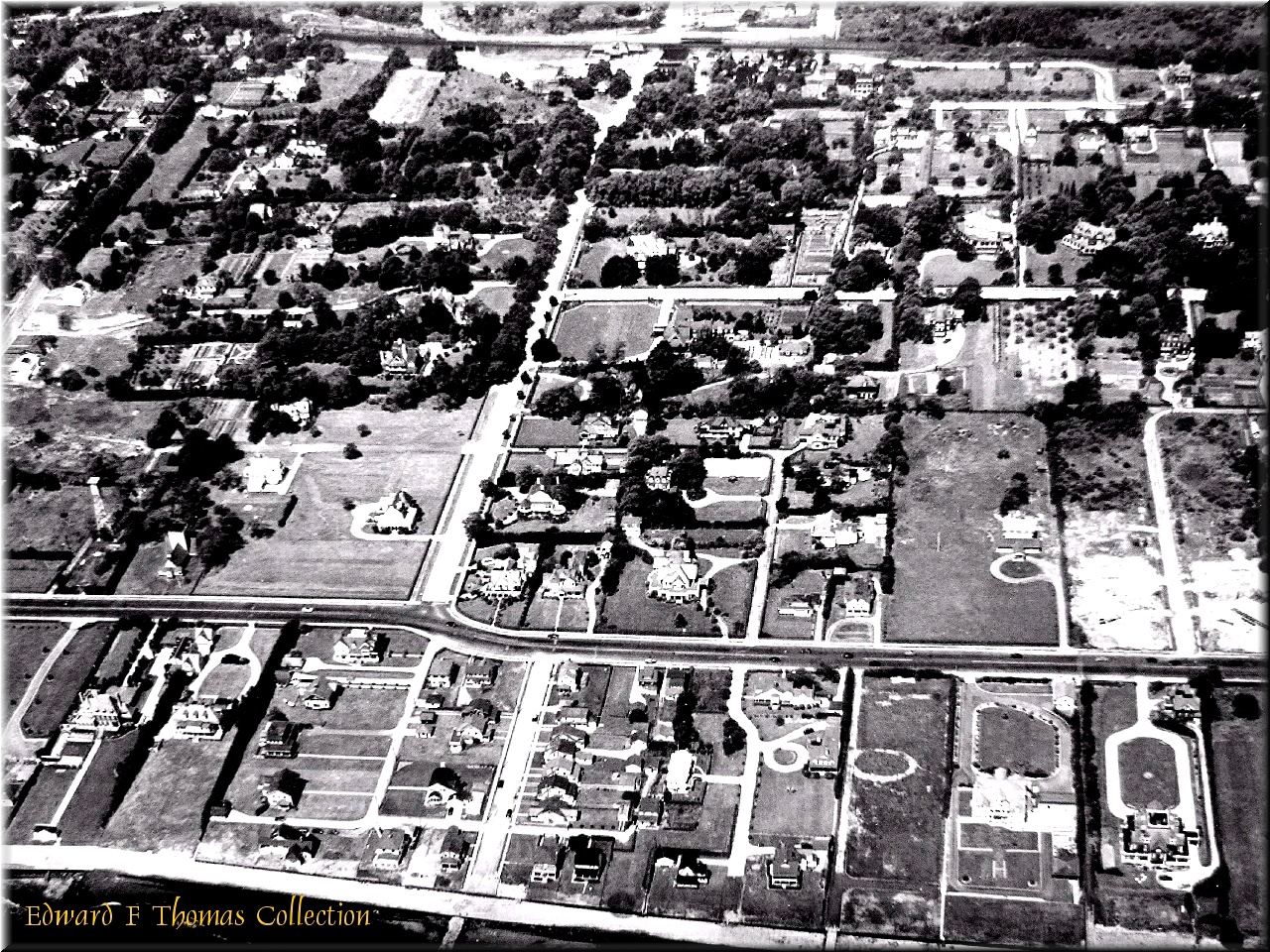 The intersection of Ocean Avenue and Lincoln Avenues.  Curious if that huge " H" carved in that lawn was a heliport. 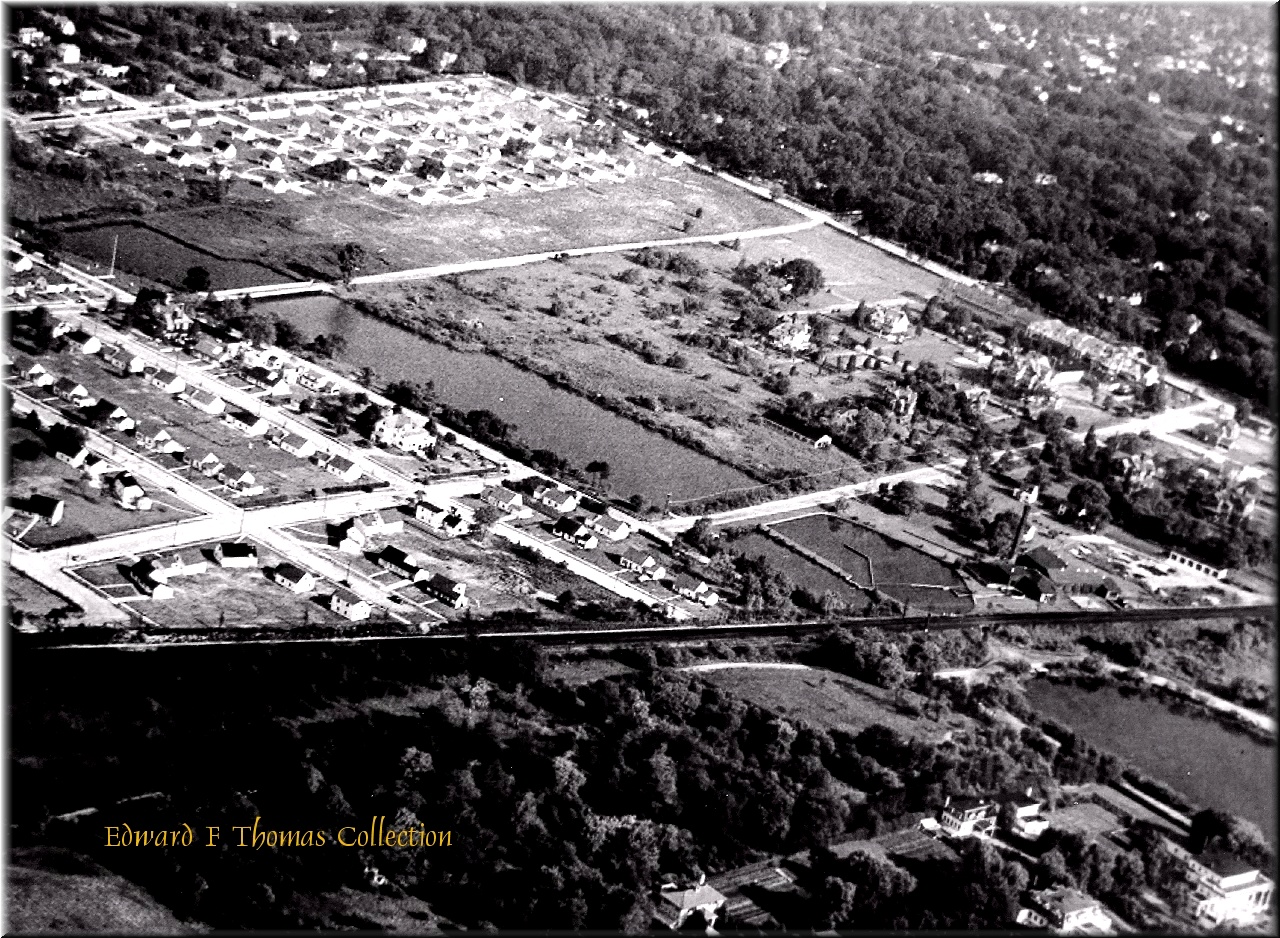 Looks odd without all the trees!  In the foreground, the "Ranch."   The old waterworks was on the lake just west of the tracks.  And in the upper right, the "Hollywood Hotel." 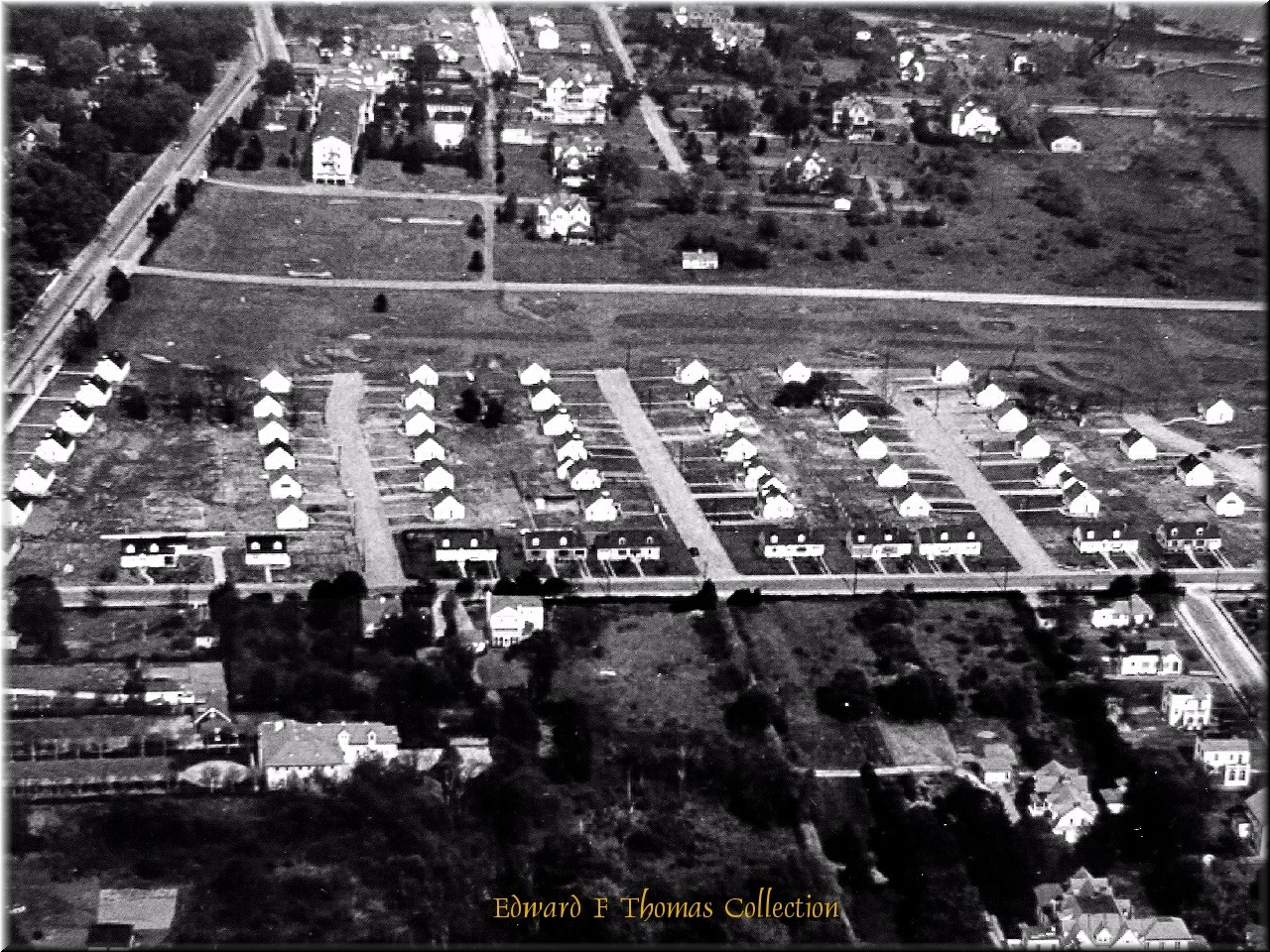 Looking east, in the upper left is the "Hollywood Hotel."   Dominating the foreground, quality, post-war shack Cape Cods.  I wonder if they were all painted the same color. 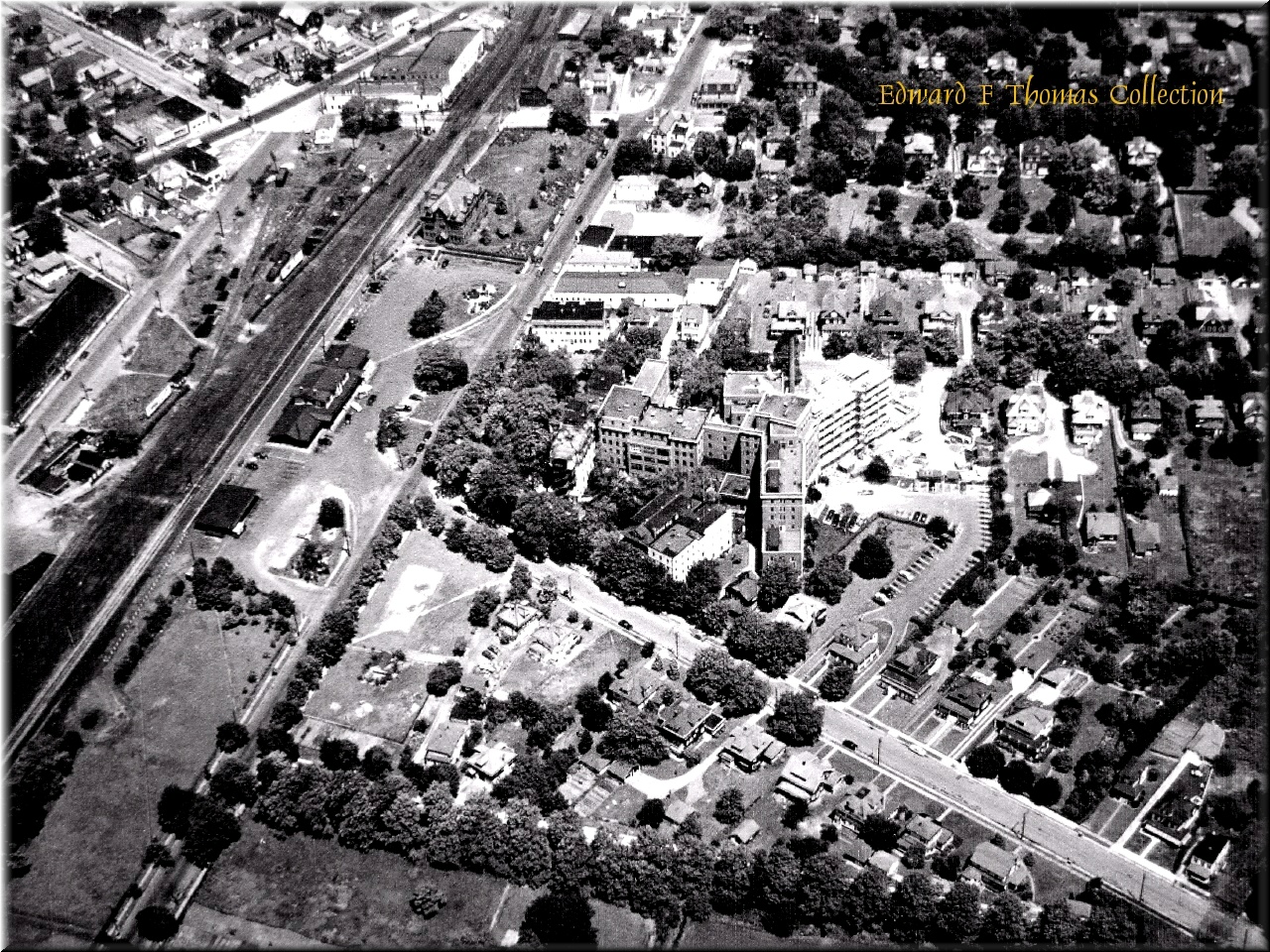 Great view of the Monmouth Medical Center still under construction.  To the left, the Third Avenue train station with an ornate structure on the north end of the rail road property. 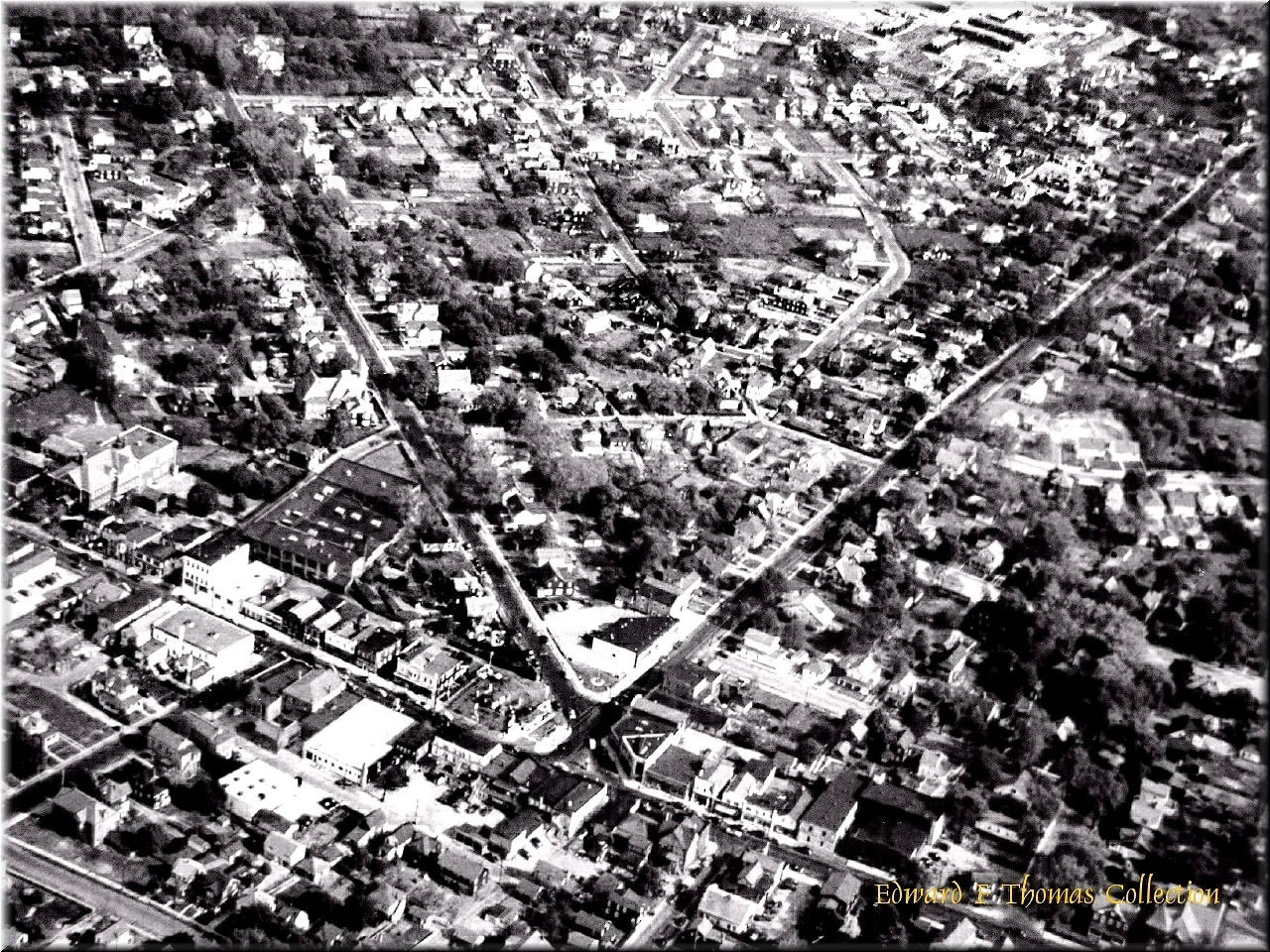